Information about caring for your wall scroll
See Larger Image 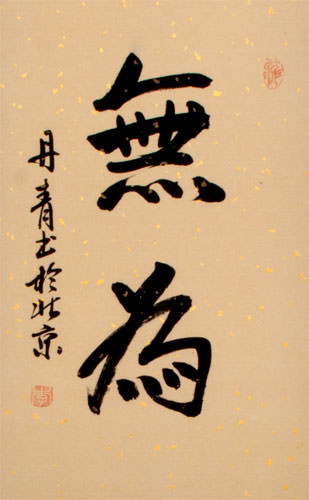 Wu Wei is a Daoist (Taoist) tenet, that speaks to the idea of letting nature take its course.

Some will say it's about knowing when to take action and when not to. In reality, it's more about not going against the flow. What is going to happen is controlled by the Dao (Tao), for which one who follows the Dao will not resist or struggle against.

There is a lot more to this concept, but chances are, if you are looking for this title, you already know the expanded concept.

Warning: Outside of Daoist context, this means idleness or inactivity (especially in Japanese where very few know this as a Daoist concept).

If you want to order a custom Wu Wei wall scroll, you can order that here: Custom Wu Wei / Without Action

This calligraphy was created by Li Dan-Qing of Beijing. He's an older gentleman who has been involved with the art community of China, all of his life. Now in retirement, he creates calligraphy for us for sort of "hobby income".

About the materials and construction of this wall scroll:

The calligraphy was done using black Chinese ink on xuan paper (known incorrectly in the west as "rice paper"). The raw artwork was then taken to our Wall Scroll Workshop where it was laminated to more sheets of xuan paper, and built into a beautiful silk brocade wall scroll. Except for the use of a lathe to turn the wooden knobs, this wall scroll is virutally 100% handmade from start to finish (even the paper is made by hand).

All orders billed in U.S. Dollars.