Buy "Luck" on a Chinese or Japanese Calligraphy Wall Scroll

We have many options to create beautiful artwork with the Chinese characters / Asian symbols / Japanese Kanji for Luck on a wall scroll or portrait.

福 is pronounced "fu" in Chinese.

The character "fu" is posted by virtually all Chinese people on the doors of their homes during the Spring Festival (closely associated with the Chinese New Years).

One tradition from the Zhou Dynasty (beginning in 256 B.C.) holds that putting a fu symbol on your front door will keep the goddess of poverty away.

This can be translated as "good luck", "fortunate", "lucky" and/or "good fortune" in Chinese, Korean and Japanese.

Occasionally, this is also translated as a type of happiness or a short way to write serendipity.

機遇 is the kind of opportunity that comes via good luck or good fortune.

機遇 is sometimes translated as "stroke of good luck".

While there are other ways to express "opportunity", I think this version is best for a calligraphy wall scroll or portrait.

Note: In Korean Hanja, this would also mean "Meeting someone under strange circumstances".

龍鳳呈祥 is often seen at weddings and other celebrations in China.

It suggests that the dragon and phoenix will bring you auspicious tidings.

The first character is dragon.
The second is phoenix.
The third is presents or brings.
And the last means auspicious, propitious, or luck.

Throughout China, the dragon and phoenix are symbols of good fortune. You will see these auspicious figures as decorative symbols on everything from buildings, furniture, wedding costumes, sculptures in public parks, to caskets and items used in ceremonies.

In Japanese, this can be the following female given names: Yutaka; Midzuho; Mizuho; Mizuki; Mizue; Mizu; Mio; Tamami. It can also be a Japanese surname, Zui or Shirushi.

In Buddhist context, this can represent an auspicious jade token or good omen.

Note: From Japanese, this character is sometimes romanized as "sachi", and is often pronounced "kou" or sometimes "rei" when used in compound words with other Kanji.

盧卡斯 is a common Mandarin Chinese transliteration for the male German name Luckas.

A simple way to express the state of being lucky.

Also used in conversation to hope that all is well with someone. 吉 is more often seen as part of a compound word with a lucky association (especially in Korean).

Not as often used in Japanese but still means "good luck" but can also mean "joy" in Japanese.

幸運な偶然 is one of many ways to express serendipity in Japanese.

In the middle is a Japanese Hiragana character that serves to connect these words/ideas together.

Perhaps the Chinese equivalent of "This blessed house" or perhaps "home sweet home".

This phrase literally means "Good fortune house" or "Good luck household". It makes any Chinese person who sees it feel that good things happen in the home in which this calligraphy is hung.

These two characters contain the ideas of "fate", "destiny", "fortune" and "luck" in Chinese, Japanese Kanji, and old Korean Hanja.

運命 is often defined as "a person's fate" or "personal fate" in various dictionaries.

These two characters can be reversed (written in either order) and yield roughly the same meaning.

This particular character order happens to be more common in old Korean and less common in modern Chinese.

龍 is the character for dragon in Chinese, old Korean Hanja, and Japanese Kanji.

The dragon is the creature of myth and legend that dominates Chinese, Japanese, and even European folklore. In China, the dragon is the symbol of the Emperor, strength and power, and the Chinese dragon is known as the god of water.

From the Chinese Zodiac, if you were born in the year of the Dragon, you . . .

Have a strong body and spirit.
Are full of energy.
Have vast goals.
Have a deep level of self-awareness.
Will do whatever you can to "save face". 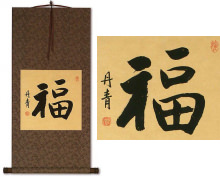 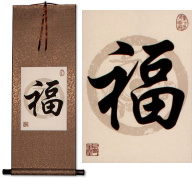