We have many options to create artwork with Inner Peace characters on a wall scroll or portrait.
If you want to create an Inner Peace wall scroll, this is the place. Below you will find a few Asian symbols that express the idea of Inner Peace.

4. Inner Bliss and Peace from Meditation

8. Reach Peace and Calm by Meditation

11. A Life of Serenity Yields Understanding

This Chinese and Japanese phrase is a direct translation for the western idea of inner peace.

The first two characters contain the idea of "heart", "innermost being", or "deep in the/your inner mind".

I have seen this phrase used as "inner peace" for art prints and even on the side of coffee cups. But I think the translation is too literal. It feels like a direct translation from English rather than a nicely composed Chinese or Japanese phrase. See my other entries for "inner peace".

靜 is the simplest way to convey the meaning of inner peace and serenity.

靜 is often translated as "serenity". It can also be used to express the ideas of still, calm, serene, quiet, silent, stillness, not moving or tranquility.

In the old days, Chinese, Japanese, or Korean people might hang a wall scroll with this character in their reading room to bring about a sense of peace in the room.

While they once used the same character form in Japan, they now use a slightly-simplified version in modern Japan (after WWII). This version is shown to the right, and can be selected for your wall scroll by clicking on that Kanji instead of the button above.

寧靜而致遠 is five characters from a longer ten-character proverb composed by Zhuge Liang about 1800 years ago. 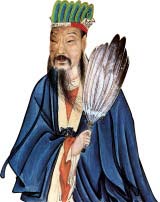 The proverb means, "Your inner peace / tranquility / serenity will help you see or reach far (into the world)".

The last word means "far" but the deeper meaning is that you will surpass what you can currently see or understand. Perhaps even the idea of opening up vast knowledge and understanding of complex ideas.

Inner Bliss and Peace from Meditation

This title refers to the inner bliss and peace that you can achieve from meditation.

This term transcends a few religions, including Taoism and Buddhism. It can also be translated as "joy of the mystic trance" or simply "meditative bliss".

Amazing that such a complex idea can be expressed in just two Chinese characters. Note that the first character is Chan/Zen (Chinese/Japanese) which means "meditation" in both languages.

和 is the simplest form of peace and harmony.

和 can also be translated as the peaceful ideas of gentle, mild, kind, and calm. With the more harmonious context, it can be translated as union, together with, on good terms with, or on friendly terms.

Most people would just translate this character as peace and/or harmony. 和 is a very popular character in Asian cultures - you can even call it the "peace symbol" of Asia. In fact, this peace and harmony character was seen repeatedly during the opening ceremony of the 2008 Olympic Games in Beijing (a major theme of the games).

In old Chinese poems and literature, you might see this used as a kind of "and." As in two things summed together. As much as you could say, "the sun and moon," you could say "the sun in harmony with the moon."

內心的寧靜 is the longer way to express the idea of "peace of mind" in Chinese.

Some may also translate this as "inner peace" but I like our other inner-peace options for that idea.

This kind of makes sense in Korean but will have an archaic read - even by those who can understand Korean Hanja.

The first and second character both mean quiet. Together, they reinforce the meanings almost creating a word that means "double quiet" or "perfect quiet".

A good wall scroll for a library, reading room, or other quiet place.

Reach Peace and Calm by Meditation

These two Chinese characters create a title that means to reach peace and calm through meditation.

安禪 is an excellent wall scroll for your relaxation or meditation room.

安禪 is also a Buddhist-related term that encompasses the idea of entering into dhyana meditation.

安禪 is also used in Japanese, but in modern times, the second character has changed, so it's 安禅 now. If you want the modern Japanese version, just choose a Japanese calligrapher, and let me know when you place your order.

鎮靜 represents the idea of being calm or cool in Chinese, Japanese Kanji and old Korean Hanja.

Note: This term is also used in Korean Hanja but there is a slight deviation in the way they write the second character in Korean. Still, a Korean person who can read Hanja, will be able to read this word. We can write it in the Korean form if you wish (just let us know when you place your order). In Korean, this is the word you might use to tell someone to "calm down" or "take it easy."

安 is used in a lot of compound words in the CJK world.

Alone, this character has a broad span of possible meanings. These meanings include relaxed, quiet, rested, contented, calm, still, to pacify, peaceful, at peace, soothing or soothed.

安 and even the pronunciation was borrowed from Chinese and absorbed into both Japanese Kanji and Korean Hanja. In all these languages, this character is pronounced like "an".

A Life of Serenity Yields Understanding

淡泊以明志寧靜而致遠 is a kind of complex ten-character proverb composed by Zhuge Liang about 1800 years ago.

This Chinese proverb means "Leading a simple life will yield a clear mind, and having inner peace will help you see far (into the world)".

What I have translated as "simple life" means NOT being materialistic and NOT competing in the rat race.

The last word means "far" but the deeper meaning is that you will surpass what you can currently see or understand. Perhaps even the idea of opening up vast knowledge and understanding of complex ideas.

The whole phrase has a theme that suggests if you are NOT an aggressive cut-throat person who fights his way to the top no matter how many people he crushes on the way, and instead seek inner peace, you will have a happier existence and be more likely to understand the meaning of life.

This proverb means "safe and sound without toil or trouble".

It kind of means that all is well with a feeling of complete safety. The ideas contained in these characters include well-being, peace, tranquility, quietness, calmness, and non-problematic.

平安 means "safe and sound" in Chinese, Japanese, and Korean.

Can also be translated as well-being, peace, tranquility, quietness, and calmness.

Note: There is also a longer four-character version in our calligraphy database.

寧靜 expresses the idea of tranquility and serenity in Chinese.